Steve: Hi its Steve Brossman here from Business Online TV. Now I got my web guru here but I call him a business growth strategist who actually specializes in online integrated marketing. Welcome along Samuel Junghenn!

Steve: Sounds like come on down doesn’t it? (Laughs)

Steve: Now your business is called Think Big Online and from what you tell me you have people come in fixated in certain small things and you actually get them to think bigger and therefore you really over deliver with some of the stuff that you do for them?

Sam:  Yeah absolutely! We have a lot of people I guess come to us and they’ve heard that social media is hot right now and they need to be on Facebook or Google is doing wonders at the moment. It’s the next best trick in overnight successes. They really come in not being able to see the forest from the trees and that’s where we help to sort of expand their vision about what is really possible for them online.

Steve: Now we hear a lot about SEO experts, Pay-per-Click experts and social media experts. All of those bit and pieces on their own can only deal with certain things but what you do is you actually look at the business – you look at what are those that should be used but most importantly whatt you do that most other people don’t do is that you integrate them and that’s the key to your success isn’t it?

Sam: Yes absolutely and once again I think that a lot of people come in thinking about certain verticals and those verticals are great but when you can try two, three or ten of them together you get multiplied results that end up with exponential results on income than what you would get using one or two channels.

Steve: Now he does sound like a geek and this guy really does know his stuff and you’ve actually put a tool together that I’ve had a look at and it just blew me away how this works.

You can actually plug in what people are doing. They might be doing x amount on Facebook or x amount on SEO and things like that and you got a score that you can write like their “getting found” score but the way that you can integrate them really just multiplies that score and as you just said, multiplies their return on investment just by plugging them together.

Sam: Yes absolutely and it’s a proprietary tool that we’ve developed in-house. Like Steve said, it enables us to determine how well they’ve integrated their marketing. Whether they are using Facebook, Google or e-mail marketing – we can give them a pretty accurate score and star rating. It’s a true reflection of how well they are doing with their online marketing.

Steve: Now when people come to you I guess they do come to you talking about tools and taking about bits and pieces of marketing out there but really what they want is more people paying more money more often.

That’s what a business really wants isn’t it and so you sit down and you actually look at the business and say what is the best way to get the best quality people to you and how you can handle them once they are there. That’s pretty unique instead of just saying okay we can give you more clicks or better returns on your pay-per-click but you actually look at it from the business sense more than anything else.

If you don’t have the proper call to actions or follow-up with e-mails and offers, the number one ranking doesn’t matter squat. You can send a million visitors to your website tomorrow but if you don’t have everything setup and integrated properly then it’s a total waste of time and money.

Steve: Yeah there’s no sense spending a buck a lot of money over here just to have it wasted there and you look at the big picture and say what is the best spend or what is the best bang for your buck and how can you actually get more people paying you more money. That’s the bottom line really isn’t it?

Steve: Yeah it’s not all about just the web stuff that these very businesses are entitled

Steve: Now you were telling me earlier about some fantastic case studies of people that have come to you and you’ve saved them a lot of money and made them a lot more. Can you share a couple of those?

Sam: Yeah sure! So one that comes to mind is we had a big law firm that came to us. They had an okay website and they tried to manage their Adwords campaign themselves. Google likes to make it look very easy and they say you can setup your Adwords campaign. It’s kind of like saying you can go and become an artist – here’s some paint and a canvass so now you’re a painter!

Steve: Google makes it very easy to blow all over the money very quickly with Google Adwords. That’s how easy they make it and that’s why they make it easy but you’ve turned all that around for them.

Sam: Absolutely so when we took them we were spending around 5 and half thousand per month with Google and over the period of 6 months we reduced that campaign spend to about 2 and half thousand dollars and we managed to double the amount of leads they were getting as well so pretty much they are about 4 times better off than before they came to see us.

Steve: Well it’s always good to get a professional in because doing it yourself is some of the great ways to lose money.

You think you are doing okay or you think we got a campaign going and we are getting people so we say wow that’s as good as it gets but when you get a professional in to say well we can make it better or I saved them money and saved them time because they didn’t have to do it themselves.  There’s a factor as well that you didn’t have to put into that. The time that they spent on that and the return on investment was absolutely phenomenal.

Steve: Which is why you are sitting here and we are doing stuff together because there’s a lot of stuff that I know I that I don’t know that I know you are really good at that I don’t  even want to touch. It’s just like saying you’re the man and you can do all that.

Now if you want to talk to Sam or get in touch with him and his fantastic team because you have a great team that you are working with both here and overseas. We’re going to have your web details across here which is…

Sam: ThinkBigOnline.com and if you go there you can have a look a bit more in depth about what we do. Drop us a line either through phone or e-mail and one of our specialists can take the time to do an audit on your website and your marketing strategy to see the things that you don’t know you don’t know I guess.

Steve: Yeah and be able to just look at it from the business point of view using the tools that people had heard of on the online space. That’s probably the biggest difference that we can point out is you look at it as a business. How can we help you make more money and by the way you can use all the stuff that we are good at – makes sense?

Sam:  Absolutely! We won’t work with people that we don’t believe we can make money in all seriousness and there are a number of people that we’ve had to turn away because we feel it’s not ethical. Your marketing should be self-funding and you only market to make money at the end of the day so…

Steve: That’s what it’s all about. Thank you so much for coming and we better get into some of the work that you’ll be doing for me. We’re going to have another fantastic interview coming for you guys coming up real soon. Cheers! 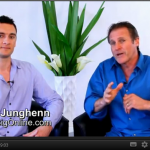